This is the planned layout of a new US Embassy building in London: 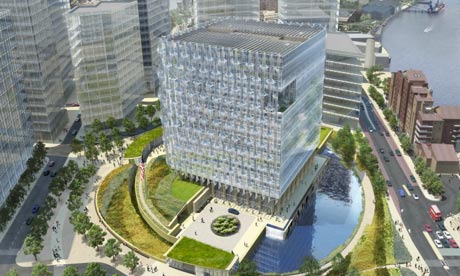 Writer Warren Ellis has some good thoughts about what this layout and design is actually saying about US post-9/11 policy, but in looking at the architecture itself, I’m wondering where the engineers pulled their inspiration from.

The banner goes on during the unveiling

You will be democratized!

Either way, it’s definitely a cold, boring structure. They may as well have modeled it after a balled-up porcupine and surrounded it with concertina wire. It’s the sort of place I’d expect to go to die in Soylent Green, or to get waterboarded by Dick Cheney.