The Evolution of Writing Tools

There's a certain satisfaction in closing the lid on the laptop, walking inside, and seamlessly picking up where I left off on the desktop.

The first thing I teach my computer tech students is technology has one goal: to make our lives easier. Whether we’re talking simple machines like levers and pulleys or supercomputers to handle complex data sets like weather and climate change, the entire purpose is to make work easy and efficient. Some of those tools may get more complex over time, but they can also handle a lot more of the work.

The same has gone for writing tools. When I wrote the tweet above, I was using Google Docs. Everything is instantly saved, no worrying about losing a few hundred words to a power outage, and I have the added bonus of being able to pick up any machine anywhere and getting back to work right where I left off. Even if my home or work Internet connection goes down, I can keep working offline or open a new connection through my cell phone’s shared data. I’ve even accessed online files on a laptop from the car thanks to my phone.

This was almost unthinkable when my friends and I first started getting serious about our writing some 15-20 years ago. I was hammering away on Professional Write on an old computer at first, then transitioned through WordPerfect, OpenOffice.org, and Pages before settling on Google Docs.

We even have better tools within those apps. Google Docs, for example, has a rich revision history built in for tracking changes to manuscripts rather than having several copies of the same novel or story on several different disks or folders.

I know a few writers who lament how the tools have gotten too complex, and all the menus and clicks just get in their way. However, there are plenty of stripped-down or minimalist writing tools out there, and even they have the ability to share across computers or in different formats.

Speaking of, the end of the format war is probably my favorite outcome of the progress of technology. Results were very spotty going from WordPerfect to Word back in the day, and even going between the same program on PC or Mac could be sketchy. I used OpenOffice.org and Pages to work with editors using Microsoft Word and they never noticed, but it did take a little work and management on my part.

Today? Just about everything opens every format seamlessly. Some editors request .rtf files for safety’s sake, but for the most part, you can send them anything and they should be able to open it. If they’re demanding .doc files, it’s more or less out of habit or because it’s what everyone else does. With Google Docs, one click will send a manuscript to an editor as a .doc anyway.

It’s nice to be able to concentrate on the writing itself and not the fiddly bits that allow it to happen. Which, by the way, is why it’s also nice to write on a Chromebook rather than on a laptop where a hard drive might crash, a virus might derail a few hours of progess, or one has to monkey with drivers and updates causing crashes. With a Chromebook, the writer just opens the lid and gets to work.

Now we’ve almost come full circle. A pencil and paper were crash proof, write-anywhere tools. Now, with Chromebooks and smartphones and Google Docs, we’re just about back to that same level of reliability.

I look forward to seeing what’s next.

The Chromebook for Road Warrior Writing 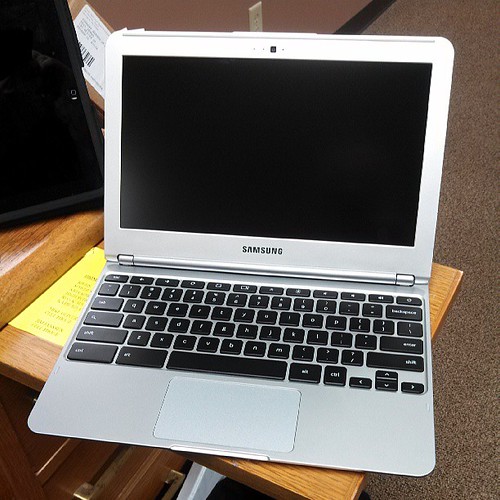 We’ve invested heavily in the Chromebook at my day job, and it’s given me an opportunity to evaluate several models and use them on a day-to-day basis. After using one for several months now, I’ve found they offer a lot of options for those of us looking for a simple, portable, and affordable setup for writing.

First up, consider the price: with some Chromebooks available as low as $170 these days, they’re about a third of the cost of an iPad and a decent keyboard or cover. For that price, a writer could lose or break one without too much heartbreak. Take a thousand-dollar MacBook Air to Starbucks, meanwhile, and one hesitates to leave it sitting on the table during a bathroom visit.

The ChromeOS is also simple to operate and very snappy. Power up a Chromebook and you’re ready to work in seconds, and battery life ranges from a few hours to 12-14 hours for some models. There are shortcuts to all of the major Google Apps, and you’ve got access to the Chrome Web Store and, soon, the Play Store for Android apps. Chrome browser users will also find their browser settings like bookmarks, history, and extensions automatically synced to the Chromebook.

That said, don’t go expecting to install Word, PhotoShop, the latest games (for your kids, right?), or other software. ChromeOS is a bare-bones operating system with enough juice to get you online. You’ll have a webcam, some USB ports, and sometimes an SD card slot, but this is no full-on desktop replacement. 95% of the apps run through the Chrome browser and are Internet apps; the rest are simple apps like the file manager, the camera app, or the calculator. 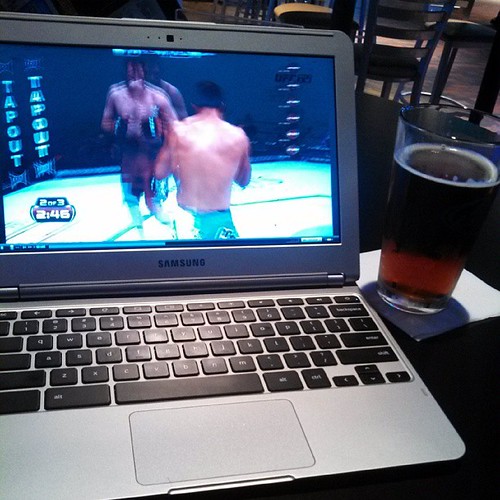 Of course, entertainment’s not completely out of the question

Most of your data will live in Google Drive. Chromebooks have small hard drives for local downloads and for offline file storage, but if you don’t buy into the Google ecosystem, your options are limited. The benefit to Google Drive is you have instant file sync and you’re not juggling file versions or sweating backups and lost data. Writing in Google Docs, writers can log in to any computer with a browser, or use Docs apps on most modern mobile devices, and pick up right where they left off on a Chromebook.

No Wi-Fi available? No problem. With offline file sync, a writer can create or edit a file and the changes will be merged to Google Drive the next time there’s a connection. I actually prefer to use my phone as a hotspot than go without a connection, but I’ve been able to work both ways seamlessly.

Brand-wise, there are more to choose from all the time. I’ve been happiest with Acer for the lower-end models. The Samsung units aren’t bad, but the Acer is a little more durable. Asus units are nice, but I’ve had some bad support experiences that have soured me on their brand for now.

For performance purposes, spend a little more for a unit with 4GB of RAM if you expect it to be a workhorse, otherwise the 2GB models are fine for basic surfing and productivity. There are also some variances in processor architecture, but the only one I’ve really been disappointed in is the HP Chromebook 11, which I found very sluggish with multiple browser tabs open. 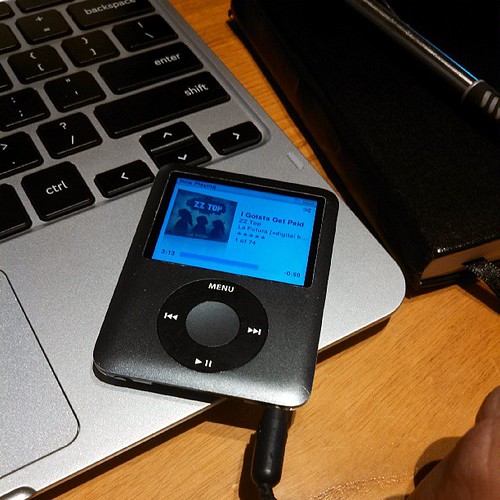 There are not a lot of downsides when you consider what you’re paying for. You’re not going to have the variety of apps there are for an iPad, or for an Android tablet, but then again, that’s not why you’re buying a Chromebook. The plastic construction is more fragile than the metal iPads and MacBook Air, but is comparable to most plastic PC laptops. I’ve seen Samsung screens break with just a little flexing, but the good news is they’re very easy and inexpensive to replace, especially compared to standard laptop screens.

Again, be prepared to buy into the Google ecosystem. One could work around it by writing in Evernote or another online service, or by juggling plain text files with Dropbox via their website, but it seems to me that would get old fast. If you’re not into Google’s Terms of Service, then you’ll want to invest in an inexpensive notebook. Or maybe you just prefer the friendly confines of the Apple ecosystem? I don’t judge.

If printing is part of your workflow, don’t plan on hooking up a printer. You’ll be printing through Google Cloud Print, which will allow you to print either to another computer’s printer (with a little setup in your Google account) or a Cloud Print-enabled network printer. Or, of course, you could just print the files from Google Drive on another computer and skip Cloud Print altogether.

All in all, I’m very happy with Chromebooks. If I take one to a Starbucks or a similar joint to work, the Chromebook is up and ready to go before they finish making my drink. I’ll typically have four tabs open: Google Docs, for whatever project I’m working on; Slacker Radio, for tuning out the environment; Evernote, for referencing my notes; and Moosti, a Pomodoro timer. Paper notebook on one side, drink on the other, and I’ve got a nice, self-contained environment I can set up anywhere. It’s even perfect out on the front porch with an adult beverage and a cigar.

If an iPad is too spendy, or tablets and keyboards just aren’t going to cut it, one could certainly do a lot worse than a Chromebook. They’re inexpensive, there’s no farting around with maintenance or antivirus, and there’s no sweating backups or file management. Just travel, open it up, and go to work.

I’m going to be testing and evaluating the Google Chromebook for the day job, so of course I’m going to take advantage and evaluate it as a writer as well.

The attached photos are of the Samsung model we purchased. It has an 11″ matte display, USB, HDMI, and SD card ports, and a full-size keyboard that, so far, is comfortable to type on. For comparison purposes, here’s a photo of the Samsung Chromebook sitting beside a first-gen iPad.

So far I like it. From first boot and setup, I had it fully up and running in just over 90 seconds. This includes the few seconds I waited for the text code from Google for my two-factor authentication. All of my desktop/laptop Chrome extensions and bookmarks showed up within a minute or so. I played a YouTube video full screen, and it looked and sounded fine.

My editor has one, and my first impressions upon seeing his and upon starting this one up are the same: this is a nice little machine. I’ll be hammering on it for the next couple of weeks to get a better idea of what it can and can’t do. Because it has offline storage for Google Drive built in, Google Docs will be my default text editor when I’m writing.

I’ll let you know how it goes in a few weeks, either way.