Our school is cutting back on traditional industrial arts programs and pushing more kids into heavier math and science courses, and it bums me out.

Not because math and science aren’t important, mind, but not every kid is looking to go on to college or to become an engineer. Even if that were the case, what good is an engineer who’s never put his hands on a wrench? Would you trust an architect who hasn’t at least framed up a shed?

Adults shouldn’t be afraid to get their hands dirty. There’s satisfaction to be had in a lot of this work, and in many cases it can save a few bucks. 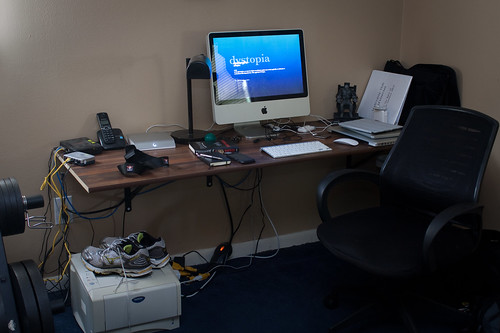 Yep, I built this. It’s not a work of art, but it works well and it’s the most comfortable desk I’ve used because it’s custom-made for my height.

“I’m not good with tools” shouldn’t be an excuse. If you grew up with cartoons, you have a pretty good idea how a hammer works. I’m not saying everyone should be able to turn a beautiful table leg on a lathe (I sure can’t), but hanging a shelf on a wall should be an easy job.

I’ve changed the brake pads on one car and on my motorcycle. I happened to have the tools for those jobs, and it wasn’t bad. All it took was a manual, a YouTube video, and the guts to tackle the job. Labor for things like that? Usually around $85.00/hour.

Car oil & filter changes are so cheap these days it’s worth it to go to a mechanic, especially when they top off fluids and perform other simple services and checks at the same time. However, I think it’s a job every car owner should be able to handle in a pinch. Tire rotations are too time consuming to do on my own (and most dealerships do it for free if you buy your tires there), but I’ve put on several spares. Nobody should have to wait for a tow truck for a flat tire.

Tinkering on the motorcycle is fun. Sometimes the narrow spaces in and around the frame and engine are frustrating, but I’ve swapped the battery, installed battery minder leads, changed the oil and filter, changed the brake fluid, and changed the brake pads, all because taking it to a motorcycle mechanic is inconvenient. Soon I’ll be handling the spark plugs and maybe the spark plug wires. The only thing I’ve paid for is tire swaps and a new chain and sprocket install. I just don’t have the proper tools or environment for those, and if I get them wrong, I could be in a world of hurt.

I first learned to get handsy with a water heater. It had a leaky overflow valve, and someone put a scare into me about possibly cross-threading the new valve and having to replace the whole thing, so I called a plumber. He was at the house for less than 15 minutes. The part? About twenty bucks. The total bill? $90.00.

Never again. When the bottom finally rusted out of that water heater, I purchased and installed the replacement myself. We had a misstep with the flux when we sweated the copper pipes, but one conversation with the owner of the hardware store put us in the right direction. Years later, thanks to that experience I was able to help a friend cut an old, broken water softener out of his water line and sweat new pipe in to close the loop.

In our new place, when the thermocouple quit on the water heater (which it did repeatedly until a recall had me replace the whole burner assembly), I replaced it myself. Not difficult at all. Another friend sweated turning the gas on and off when his thermocouple quit, so he paid a plumber. Once again, small job, big bill.

I’m not saying we should take money out of some working stiff’s pocket. We once had plumbers dig up and replace a sewer line to the tune of $4K because it was too big a job. But I’ve replaced toilets and kitchen & bathroom faucets without batting an eye. I’ve helped a friend install a countertop, and I’ve wrestled with a garbage disposal for an hour until I realized the gasket was upside down. These are sometimes annoying jobs, but they are not difficult or highly technical.

In fact, I think a great number of smaller mechanical, plumbing, and electrical jobs are done simply because the car/homeowner doesn’t want to deal with it. Meanwhile, we probably saved hundreds of dollars across all of those jobs, and the sweat equity and satisfaction made them worthwhile.

I paid out to have a furnace installed and several windows & a door replaced because they’re just too big a job. However, I’ll be tackling a laminate floor and building a soffit in the near future. First time for both, but the flooring just snaps together and I’ve helped with a small drywall job, so I have a pretty good idea what I’m in for. Wish me luck.

Now I include my oldest son in all of these jobs, and sometimes his younger brother, depending upon the job. Heck, the boys installed the last two brackets of my desk because I didn’t feel well. I want them to have the confidence to do some of this stuff on their own when they move out, whether or not they have the opportunity to take a shop class in high school.

And ladies, this applies to you, too. My wife may not have had the muscle to break the lug nuts loose on one of those tire swaps, but I’m sure she could have handled any of these other jobs with the same instructions I looked up.

We’re both looking forward to our daughter learning some of this stuff soon. If she ends up having to change a flat tire while out on a date someday, she’ll know she needs to dump his ass, won’t she?

Next time you have a small job around the house or on your vehicle, ask yourself, “Can I handle this myself?” Then dig in and get your hands dirty.

Lenore: Back on the Road

Lenore’s front brakes began to squeal at the end of the last riding season. I thought about taking her to a mechanic, but I knew that could get expensive, depending upon the problem. I mulled it over all Winter, and finally decided to man up and tackle it myself.

After a little research, I knew it had to be bad brake pads or it was time to bleed the brake line. One surf through Amazon and I had pads on the way for under twelve bucks, shipped. Tell me I can make that happen through a mechanic!

Shortly after that I picked up some DOT4 brake fluid for around five bucks and two lengths of plastic tubing for a buck and a half. Tuesday afternoon, my eldest son and I went to work. 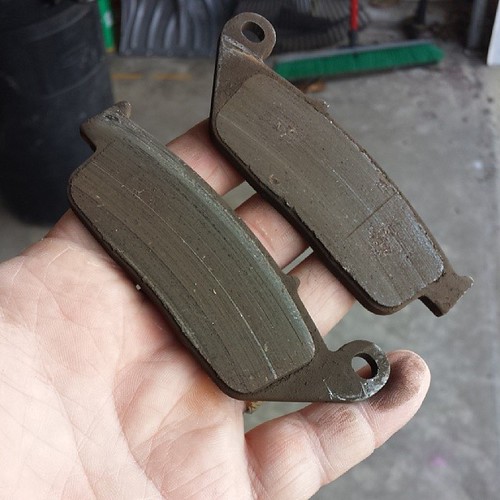 The old brake pads were definitely shot. I couldn’t tell how much pad they had left before removing them because I didn’t know what I was looking at. Once I got them off the caliper, I could see they were just about down to bare metal.

We inserted the new brake pads, then we bled the brake line. All in all a piece of cake, and I love that the bike came with all of the tools we needed. My son even learned a few things in the process, and for once it was more than just creative cussing. 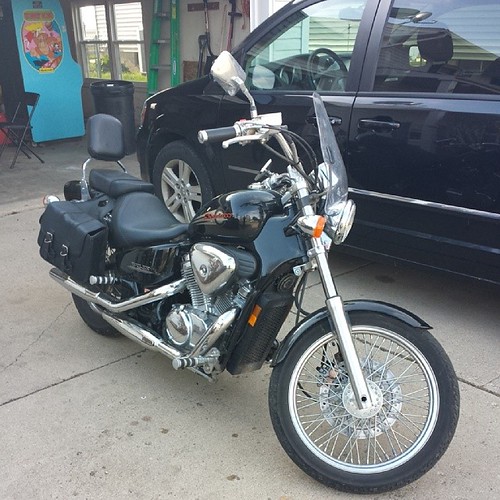 I took her for a test drive that night. Brakes worked like a champ! Less than twenty bucks and I’m back on the road. Next up she’ll get a bath, a fresh coat of chain lube, and an oil change, and all will be right with the world.