It’s been a while since a cigar kicked my ass, and the Uranium from Foundry’s Compounds, Elements, & Musings line came pretty close.

The CE&M line is Foundry’s small batch, a mix of blends that will even vary within the same box. My guess is the names are all about the size and shape of the cigars first, and then the design of their boxes and bands. There were a few different Foundry options in the humidor I shopped, and I opted for the Uranium mostly because it was a large cigar (7×70) at a very reasonable price ($7 and change). 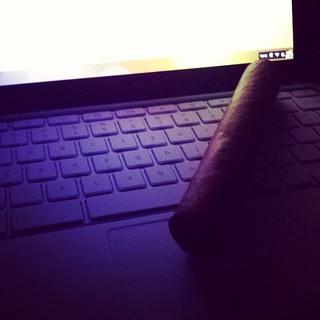 The Uranium is a big one

Because the blend changes, I can’t be sure what I had in my hand. Near as I can tell from a Google search, it was probably some mix of Honduran, Nicaraguan, or Costa Rican tobaccos. It lit up easy and had a very smooth draw given the size. Whatever the mix, I enjoyed it.

Two-and-a-half hours later, the cigar was still going strong. I finished up my work on the laptop (wrapping the second short story in the The Pack series started with “Bravo Four”), got up, and walked around for a moment. The buzz hit me pretty good, then, and I realized I was flushed and sweating despite a cool breeze outside.

Well done, Foundry. Next time I’ll know to save this one for after a meal. At seven bucks, I’d say this cigar is a steal. I’ve also tried a cigar from their main line, the one that comes with a metal cog around the band, and I thought it was pretty great, too.

Foundry is going to be a line I need to explore in a little more depth before the Compounds, Elements & Musings line disappears. I can’t recommend the Uranium to a rookie, but for experienced smokers looking for some variety, give it a shot.