It’s been a while since I’ve posted a cigar review. It’s not because I haven’t been enjoying them, just that I’ve been too distracted to sit down and write about them. A local bar has an enclosed porch with a heaters and a nice fire pit, so it’s a great spot to relax and hang out with a cigar and a drink. 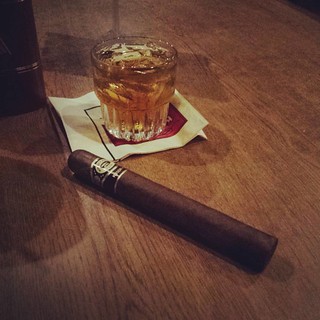 Of course, rumor has it the laws are changing and anything with a floor and a roof will be considered “indoors” and thus a non-smoking area. I haven’t seen it in the various lists of new Illinois laws coming January 1st, and the wait staff at the bar hadn’t heard anything about it yet, so with luck it’s a ways off for the existing bars—some of whom built enclosed patios to accommodate smokers—or they will be grandfathered in and not subject to the expanded smoking ban.

If the law does change, though, it’ll make for some long Winters with cigars few and far between. Ack. It’s hard to beat noodling on a plot point or a bit of dialog over a cigar.

CI offered up several Black Friday deals, and the Copper Label looked like a great deal. I got started with their ACID line way back when, and I’ve enjoyed their Natural, Sauza Tequila, and other labels. I felt having something on the mild end of the flavor spectrum would round out my humidor, too, and give me a few sticks to hand to friends who don’t always like darker cigars.

CI describes the Copper Label as a blend of Drew Estate’s Natural and ACID brands, and I’d say that’s exactly right. They smelled both sweet and savory right out of the cellophane, and before I lit up I could taste creamy vanilla similar to the ACID Blondie.

The cream turned bitter on light, but it quickly mellowed again. The strong vanilla quit and gave way to a subtler, creamy flavor that accented the earthy smoke rather than overpowering it. The smoke itself was not unpleasant, and the construction held up well. I think my only concern is going to be burning through them fast enough so the vanilla doesn’t linger in my humidor.

I see now that CI is selling five sticks for $35, so I got them for a little under half price on Black Friday. A steal for a good smoke like this, assuming you’re okay with the sweetness. The Copper Label is not something I’d normally fill my humidor with, but it offers a nice break from the stronger cigars I’ve been favoring lately.

I griped about a crummy day a couple of weeks back, and Qweequeg stepped up with an offer to send me a few cigars. Who can turn down an offer like that? Her care package arrived by the end of the week. The Rugrats enjoyed the bonus dinosaurs

How cool is that?

I started with the My UZI Weighs a Ton last weekend. I’d heard of the brand, but I had never seen one before. With a little surfing I learned it’s a collaboration between Drew Estate and Joya de Nicaragua, and it’s billed as a medium- or full-bodied cigar on various sites. Opinions seem to differ on the exact tobaccos that make up the cigar, but hints of ligero in the filler caught my eye. I have yet to be let down by a ligero blend.

On first cut, I wasn’t pleased with the draw. I used my knife to poke a cross into the packed tobacco, which freed it up some. I lit up, and the problems ended there.

This, my friends, is a good smoke. Its firm construction held its ash. It burned slow and smooth, and it took me to closing time at a local watering hole. I’d put it in the medium range, with silky smoke and notes of leather. I smoked it down to the last inch or so before the bar staff kicked us out, and it never turned hot or bitter.

Collaboration or not, Jonathan Drew has done it again. The man just knows what he’s doing. Thanks again to Qweequeg for turning me onto this smoke! I look forward to trying another soon.

When I ran out of cigars last week, my man Mark sent me a little care package: Yeah, this will do nicely!

The two on the right stand out? Yeah, they did for me, too. I wasn’t familiar with Game cigars before this point, but a quick Google search told me they’re machine-made, flavored cigars. White Grape and Wine seemed like odd choices for cigar flavors, but because flavored cigars can contaminate a humidor, I started with them.

Despite their labels, though, both tasted the same: a sweet, creamy, almost vanilla flavor. They burned quick—a consequence of the machine process—and grew hot near the end, and the ash crumbled easy. They’re a step up from, say, Swisher Sweets, but are still better suited to gas stations and convenience stores than premium cigar shops.

Anyone looking for a flavored cigar should stick to the good stuff: Drew Estate’s ACID line. The ACIDs are rolled like any other cigar and have their own blends, and they have four flavor ranges in a variety of flavors from sweet and gentle to bold and spicy. Drew Estate’s Ambrosia and Sauza Tequila cigars are also good smokes, with the Ambrosia being a bit lighter and sweeter and the Sauza Tequila having a more subtle flavor.

More importantly, though, the Game cigars did their job in letting me get some work done. It doesn’t matter much what the cigar tastes like, as long as the fingers are flying across the keyboard.