School year, that is.

The students at the day gig finished yesterday, and the teachers will wrap up tomorrow. I work all summer, but I’m looking for this year to be much quieter and more productive than last year.

One teacher has been very helpful in helping me push technology into our district, but he’s retired as of tomorrow. As a parting gift, he handed me a bottle of Four Roses Single Barrel. 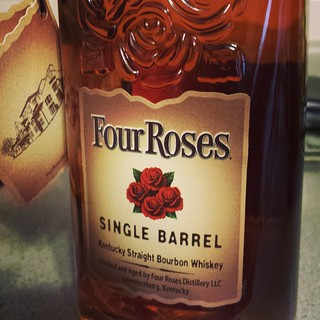 Score. Thanks again, Steve! I owe you a good lunch this Summer, both for this and for all the assists.

Now I’m kicking back on a Whiskey Wednesday with a bourbon and a smoke, reflecting on good times, and getting ready to pound on a short crime piece.

“Dad, why do you do things that are bad for you?”

The middle son asked me that as I walked out of a local liquor store with a fistful of cigars. It’s a fair question, and a reasonable one for a nine year old to throw at his old man. It prompted a conversation on vice and moderation. This brought on several follow-up questions from the eleven year old, an active participant in his school’s D.A.R.E. program.

Kids aren’t stupid. I answered them straight: “Yep, they’re bad for me, but I like ’em.”

Cigar aficionados can debate the finer points of the chemical content and additives in cigarettes versus cigars, or the differences between puffing and inhaling, but when it comes down to it, there will always be a risk involved in lighting something on fire and taking in the smoke.

Of course, binging on them kind of kills the idea of moderation. I’d been a good boy most of the summer, but after vacation I set out on a mission to burn through the contents of my humidor. I’m pretty sure my doctor would punch me in the face if he knew how many I’d gone through.

But, hey. Stress. And a powerful need to get some writing done.

I did a piss-poor job of keeping track of them or keeping the cigar bands, so I don’t recall what I had. I know two were Tatuaje Little Monsters, both of which were quite good, but the details escape me. The writing needed to be focused on some short work and a comic script, so I didn’t set aside the time for Smoke Blog entries.

I can tell you, however, the Partagas 1845 I smoked tonight blew me away, right from the light. Hints of cocoa on the wrapper, a smooth draw, thick smoke with leathery note, and solid construction all combined for a blissful, relaxing experience. The cigar dude at Friar Tuck assured me I’d enjoy it, and he was dead on.

I needed it. This is the busiest time of year at the day gig, and I’ve been non-stop for a week and a half now. Some weekend work and a lot of time doing extra tasks from home, combined with vendor phone system issues and construction setting me back even more, has had me on edge. I haven’t been able to get to karate class or do my home workouts, much less write.

The Partagas, a glass of Four Roses bourbon & soda, and some mindless browsing through paper notebooks and notebook reviews proved a great way to unwind.

And that, kids, is why some bad things are also good for me.

Now my humidor sits empty on my desk. I’m going to need a box of something to refill it, but I may need to sell some books first. Nudge nudge, wink wink.

I did’t know there was such a thing as National Bourbon Day, but it makes me happy. Four Roses Yellow. Best part of this photo? Having to do the shot after.

It also may explain the day’s oddities.

I jumped on the motorcycle and rode down to the gas station this morning, where I saw our local Santa Claus. At least, he looks like Santa Claus. Old guy, big belly, long white beard. Drives a rusted-out, dinged-up old van and I once saw him—complete with Santa hat—sucking down a nasty gas station burger in said van. This time, sans hat, he was making a purchase at the counter: a bottle of wine, a six pack of beer, and a Dove bar. Quite an odd mix at 9:15am. He almost dropped the beer twice while moving over to check his Lottery ticket numbers. When I left, I saw his keys sitting on top of his van.

Jump back on the bike, drive down the street, slow to make a left. Another car coming opposite direction slows, slows, slows, then stops right in front of my turn. Hard on the brake and clutch, stare her down for several seconds before she realizes I’m parked right next to her. She jumps, waves a half-assed apology, then drives on.

Still on the bike, riding through town, spot a woman working in her yard. She’s wearing shorts and a sleeveless turtle neck, with the turtle neck unrolled and pulled up over her nose. I swore she was headless for a second.

Can’t wait to find out what kind of weirdness I run into when I get out of town and into Peoria proper.

Meanwhile, today is also Flag Day, the only holiday Hallmark doesn’t ram down our throats and guilt us into buying cards for. Show your patriotism, America! Salute the flag and down a shot. Repeat as needed.

Smoke Blog: A Couple of Big Ones

The humidor’s environment is finally under control. Hells yes. Last check, 77 degrees and 74% humidity. It took a couple of reseasonings, but the results were worth the minimal effort. \m/

I burned through two sticks this week while getting some work done, and both times I opted for some of the larger smokes in the humidor. The main motivation was to stay busy longer, but I also felt they were less likely to be affected by the period of time the humidor was out of whack.

First up was the Macanudo Cru Royale. When I first lit it up, I was not impressed. It was very harsh and hot. However, this is possibly due to the dry environment in the humidor before I got it fixed, as it quickly mellowed into a fine smoke. Loaded with hints of leather, it smoked clean and easy. Not a remarkable smoke for my palate, but it paired well with the Boulevard Smokestack Series IPA (Double-Wide IPA, in fact) I was drinking. If you’re a Macanudo fan and prefer a medium- or full-bodied cigar, pick one up.

Last night I opted for a CAO Gold series maduro. This Churchill (I believe) stayed with me a good two hours. Very impressive. Not my go-to flavor preference, but I enjoyed it. Sturdy, easy to hold, lots of smoke to play with. A hint of cocoa in the beginning, then that hefty maduro profile took over. Near the end it picked up in heat and needed to be touched up with the lighter a few times, but not enough to kill the cigar. Alongside some Four Roses Yellow bourbon, it made for a very pleasant experience as I punched the keyboard.

For those wondering how I’ve managed to get so much variety in these Smoke Blog entries, I have two explanations: 1) my wallet; 2) my cousin Mark.

I like to experiment, and because I don’t always have the cash to drop on a full box, I pick up a stick or two at a time. The rotating stock in the limited cigar selections in Peoria then makes it easy to try different things. Sometimes this bites me in the ass, but more often than not I’m able to pick out reputable brands and some pleasant surprises.

Most of my stock right now, though, is courtesy of my cousin. Twice now he’s sent me a variety of cigars to try, typically to celebrate finishing a project. He also once rounded up a bunch of guys on a forum to restock my my humidor when it ran dry. It’s been great for the blog, for the productivity, and for the general enjoyment of the smoke. Thanks again, Mark! I hope to return the favor sometime soon.

The dude in Fargo got hosed

You all remember the wood chipper scene in Fargo, right?

Poor Carl. Anyway, turns out Gaear got hosed by a bad wood chipper. Today, contractors took down trees at my day job to make room for new construction. They fed entire trees to this thing. Mulched them in seconds. You get surprisingly little mulch from a tree

With one of these bad boys, Gaear would have been long gone by the time Marge showed up.

Plumbing can screw up your whole day

Slip nuts on a sink drain can, apparently, spontaneously break. I drained a sink full of dishwater and heard it splash all over inside the cabinet. It doesn’t look like a lot of water in the sink, but when it’s spread all over your cabinet, it’s quite a mess. Cleaning up, getting parts, and repairing the sink derailed the rest of the day’s plans.

If you do it yourself, that is. I’ve learned more about plumbing in the last two homes I’ve owned than I ever thought I would. I can now replace drains, reseat toilets, sweat pipes, replace water heaters, and replace thermocouples and heat elements on water heaters.

Really. You should try it. Not as good as their Small Batch, but still good. Goes down smooth.

No computer or operating system is immune to occasional glitches, and ChromeOS is no exception. On the plus side, WordPress saved what I was working on, as did Google Docs. And the boot time? Just a few seconds. I was back to productivity in less time than it took for me to cuss the thing out.