Mike | January 27, 2014
Comments Off on In the Dark Now Available for Pre-Order

In the Dark Now Available for Pre-Order

The In the Dark horror comics anthology will hit shelves on April 23rd, but you can preorder your copy today with Diamond/Previews order code FEB14 0452.

In the Dark had a successful Kickstarter campaign around Halloween last year and will be published by IDW Publishing. The backers already have their copies reserved, and now preorders are available to the general public. Simply stop by your favorite comic shop within the next couple of weeks, give the guy behind the counter the FEB14 0452 order code, and you’ll get your copy in April.

Don’t know where to find a comic shop? Check out the Comic Shop Locator Service.

Congrats to editor Rachel Deering on getting this monster anthology funded and published. I’m looking forward to reading it myself!

It’s All About Trust

If a writer is going to succeed in self publishing, whether through a Kickstarter campaign or just jumping in on Amazon, he’s going to need the trust of his audience. More specifically, his audience must trust that he will actually deliver the product, deliver it on time, and that it will be a quality product.

This, I think, is the ultimate key to self-publishing and/or Kickstarter success.

Let’s revisit the 1,000 True Fans theory for a moment. In a nutshell, it says a writer—or any creative type, really—can make a living off of 1,000 true fans, or 1,000 people who will buy anything and everything said writer/creator produces. Put up a book or a print? They buy it. Release a t-shirt? They wear it. Add content to an existing project and produce a special edition? They throw their money at you.

1,000 True Fans, then, are people who trust the writer. They have a history with the writer, and they have a reasonable expectation the writer will continue to deliver.

The writers with these fans are ready to go the self publishing route. (That’s not to say nobody else should, but that’s a subject for another blog post.) I think Brian Keene, for example, has the fanbase to pull it off. When he puts out an extra-crunchy edition of a new book, it sells out, often within 24 hours. When he puts his name to a publisher’s imprint as editor, his fans snap up those books as if they were his own. While he made the business decision to migrate to Deadite Press to avoid the logistical headaches of things like covers, design, and electronic formatting, several of us had no doubt he would have continued to sell well either way and made a living.

This extends to Kickstarter, too. Consider Chuck Wendig’s Kickstarter campaign for Bait Dog, the sequel to Shotgun Gravy (which, incidentally, he self published). Wendig doubled his goal. Why? His fans trust him. Check out all the Wendig content on Amazon and it’s clear the man is a writing machine. He’ll deliver. Shotgun Gravy‘s 71 four- and five-star reviews suggest they trust he’ll deliver quality, too. (I certainly enjoyed it.)

Boom! Project funded in ten hours because his fans trust him.

And to expand on yesterday’s thoughts, now Wendig can write Bait Dog with the confidence it will be worth the time it takes away from his other projects, such as his deal with Angry Robot Books (starting with Blackbirds, which I am currently enjoying), his recent three-book deal with Amazon Children’s Publishing, and the time he puts into his website and his books on writing advice.

Kickstarter is an effective tool when used correctly. Unfortunately a lot of people seem to treat it like a lottery ticket without reading the small print about the odds.

Kickstarter intrigues me when it comes to novels and comics projects. There are a lot of great projects on there, some of which blow their funding out of the water and others which fall well short. When they’re very successful, I can’t help but wonder if the creators wouldn’t have been better servered going through the standard publishing path in the first place.

Yet, sometimes the creators have turned to Kickstarter because the standard publishing path has failed them. 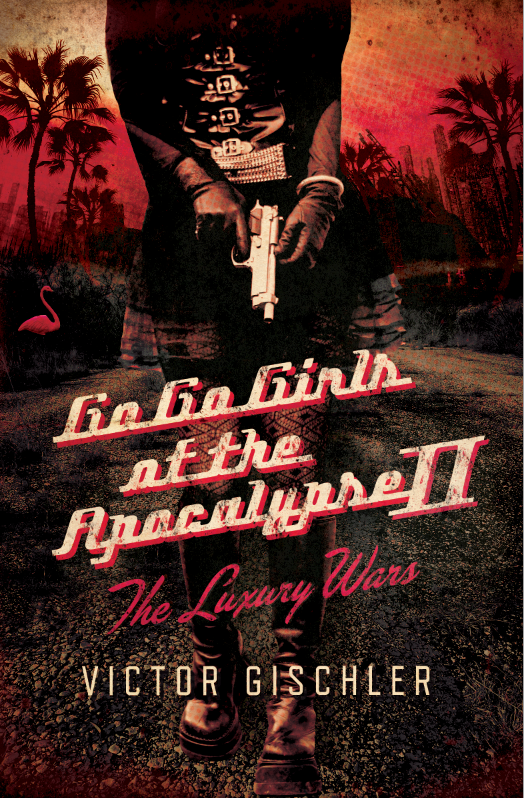 You’re going to want this.

I really enjoyed the first book, so I was happy to back the project as soon as I heard about it.

In just a few days, Gischler has almost hit his goal, a very reasonable $3,000. He’s also sold out his $100 and $250 level rewards and one of his $500 rewards. Those higher rewards alone amount to $1750 for a book he hasn’t even written yet, which is in the neighborhood of the advances a certain defunct mass market paperback publisher offered.

And this is not an advance from a publisher making an investment, mind, but money from fans eager to read the book. Chances are he’s going to destroy his goal.

This is exactly the kind of project I’m talking about where, given the fan response, I don’t understand why a publisher hasn’t picked it up. Yet, as Gischler informs us in the project video, the publisher of the first Go-Go Girls of the Apocalypse was not interested. If Gischler smokes his goal, someone screwed up. Maybe the publisher underestimated fan response, or maybe they need to rethink how they determine a book’s success or failure.

At five bucks, backers get a copy of the book. At ten bucks, backers get their name in the special thanks at the back of the book. Either way, the sequel is cheaper than the Kindle edition of the first book. It’s win-win for Gischler and his fans, because now he can write the story the fans want and it has a shot at making some money.

And that, my friends, nails the real advantage of Kickstarter for writers: knowing a project is not a waste of time. Writing is a business, and if a full-time writer works on a book that’s already been rejected once (probably to the detriment of other paying work), there’s a good chance he’s going to have a tough time paying the bills. With a positive Kickstarter commitment, a writer can make a business decision to fit the project in with his other projects. If a campaign fails, the writer knows he should probably work on something else.