I’m wrapping up vacation from the day job this week. Unfortunately, I’ve spent very little of that time on myself.

I’m not here to dwell on the negative. Most of the problems I’ve had can be summed up by the simple bad timing of my vacation time. One goal was to relax and take time away from the day job, and that part was mostly successful. The other, which I do want to talk about, is taking another look at my creative time.

For one thing, I often spend a lot of time sweating the time I don’t have. That kind of thinking gets counterproductive fast. So rather than pressuring myself to create create create, I spent mostly-idle time thinking about, well, time.

I did a lot of driving, for example. I did a lot of manual labor, such as housework, helping people move heavy stuff, or lifting weights. I did a lot of cooking, in particular grilling and all the prep work that comes with it. It’s mostly-idle time in the sense that I’m physically engaged, and thus unable to jockey a keyboard, but my mind is free to wander. So, when I wasn’t concentrating on preventing 265 pounds of iron from crushing my sternum to powder, I considered how I could best free up other time to jockey a keyboard.

Workouts are one of the problem areas. A karate workout is constant activity, but weightlifting includes rest periods. My bench and weights are in my office, and it’s convenient to sit in front of the computer during rest. I keep a timer running, but in trying to turn those rest periods into productive time and get something done, I created a monster: I got distracted, and my rest periods were blown. Sessions that should be an hour or less ballooned into long grinds, which are counterproductive in several ways. I need to refocus and bang out the workouts so I have more uninterrupted time afterward. 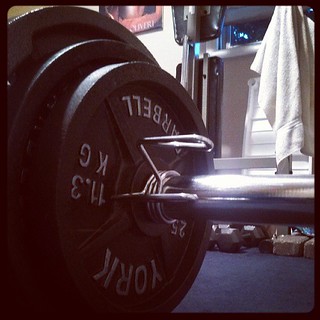 Fitness time is important, too, and not something to feel guilty about

I decided, during that mostly-idle time, that thinking, plotting, and research is not wasted time. It’s not as productive as cranking out the word count, but it’s still important. I’ve admitted I’m not a seat-of-the-pants writer anymore. Producing a series like The Pack takes more planning. Working on comics means plotting out the beats, the page breaks, the issue/chapter breaks. Putting all those pieces together is not wasted time, so it must count as creative time. Ignoring or skipping that time is foolish.

Next I put some thought into the best uses of my time. Family time is obviously important, as is time with friends. It’s selfish to deny them—and myself—that time. I also spent a lot of time this Spring and early Summer working out with an attack team to help a pair of nidan (second-degree black belt) candidates prepare for their test. I neither regret nor resent that time, but I have to realize next time around that “a couple of extra hours in the dojo” for me also includes a long drive. I alleviated some of that time by hitting a Starbucks to write before or after practice, but the overall time commitment is still there.

In short, I will need to say “no” more often.

I realized, too, that blogging is valuable. Not so much in the sense that it drives sales or interest (it usually doesn’t, especially these days), but in the way it affects my mood. I like the journaling aspect of it, and it helps both my mood and mindset. I haven’t made near enough time for the blog these past few months, and while it hasn’t affected my page counts and other minutiae a lick, it has negatively affected my mood. Ideally, I’ll blather on like this more often in the future. 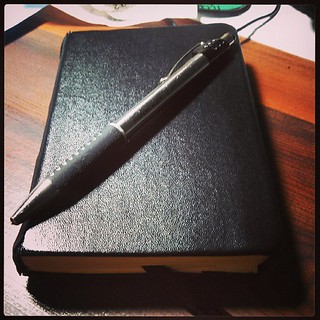 When I can’t do it digitally, I can still go old school

The vacation has also allowed me take a good, hard look at my routine. In removing the day job from the equation, I can see where I spend the rest of my time.

My morning routine has become a time suck. I roll out of bed and into the computer chair, which started with productive time but lately has become idle time. My inbox and social accounts were busy following the release of Lie with the Dead, but that’s died down. I also have to take a new pill every morning (more on that in another post) and I can’t eat for an hour, which compounded things by making me to feel like my morning’s on hold. I need to revamp that shit, and I need to work with that stupid pill, not against it.

Next I need to do another culling of my RSS feeds. Reading and researching is great when I’m waiting for a software install or virus scan or hard rive restore at work, but there’s no reason to keep up with all that crap the rest of the time. I’ve developed this weird anxiety over unread feeds, and it’s stupid. I’d get home from an event with the kids and look for some relaxing downtime, but what should be at most ten to fifteen minutes of surfing quickly becomes a major time sink. My delete button is my sword to battle the Feedly demons.

The good news is I resisted the television trap this week. Those new episodes of Hemlock Grove aren’t going anywhere. I finally have access to the HBO back catalog thanks to Amazon Prime, but I don’t feel the need to shotgun seasons at a time of Oz or The Sopranos. Cutting the cord continues to be one of the better decisions I’ve made in recent years.

Last but far from least, I’ve dumped the guilt. I still love writing, but I’m extremely busy. Yes, it’s damned difficult to make time to write, but it’s also not doing me any good to hate myself for not doing it. It’s even worse to hate the act of writing for my lack of time. This revelation (decision?) alone may be the most important difference moving forward.

I started my vacation in a foul mood, but in the end I was able to accomplish exactly what a vacation is meant for: I hit the reset button. I didn’t take a trip, I didn’t do anything fancy, I just used the vacation to reflect and analyze my time.

If you’re having the same problems, I suggest you take your own vacation. It will pay off.

It was a long and much-needed vacation, but I’m back home and behind they keyboard. If you’ve been following me on Twitter or via my Flickr photostream, you’ve seen some of the things I’ve seen and done. Many, many more pics are forthcoming.

Of course, if you weren’t following either Flickr or Twitter, you probably thought I croaked or something because once again Twitter Tools didn’t post my Twitter digests as blog posts. I hate seeing long gaps in posts, and that was supposed to fill the void. Unfortunately it hasn’t worked since they upgraded their stuff, and I can’t upgrade my WordPress because my hosting company is holding me hostage (trying to get me to buy an expensive package), so I’m probably going to dump them and try another host.

Which means another downtime period in the coming weeks while things switch over. Ah well, it’ll be worth it.

If you ever have an opportunity to visit Hawaii, go. We had a great time on the Big Island and we’ve already decided it’s somewhere we’ll want to visit again. Wonderful weather, plenty to see and do, and generally just a great place. The Wife and I both joked about moving to Kona, and after a minute or two, we weren’t sure we were really joking.

I’m embarking on a road trip that will include about 12 hours of actual driving time with three young children.

I’m either really brave or totally insane. (To some of you, there’s no question.)

I’ve already been asked if there’s some mysterious agenda bringing the Four Horsemen together for the second time in a month. This is Oliveri, Keene, Huyck and Cooper we’re talking about; of COURSE there’s something going on! It’s just not what anyone thinks. Copious amounts of lead will be returned to Mother Earth. Hide your salmon.

Moblogging will be likely as I put the CrackBerry through its paces. Twitter digests will go up daily. MySpace readers are SOL because MySpace sucks.

If CNN starts reporting a trail of destruction across the Midwest, that’s just my kids. Don’t worry, FEMA will show up and make things worse.